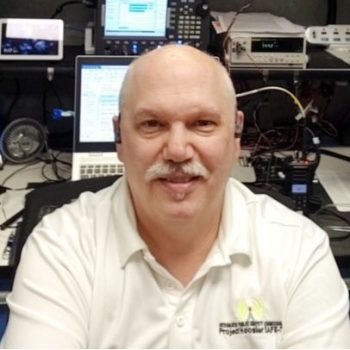 Matt became interested in electronics and communications at an early age making crystal radio sets, tinkering with old walkie-talkies, and taking apart old tape recorders to see what made them tick.

In high school, he took basic electronics and majored in Radio & Television Electronics.

Though he did not follow a technician career immediately, his electronics training was an asset during his 16 years as an automotive technician/mechanic.

After that, Matt became the Speed-Timing / Radar / Vascar technician for the Indiana State Police, retiring from the agency after 29 years.

His retirement was short-lived, lasting only a day!

Matt is currently a Communications System Analyst for the Integrated Public Safety Commission where he still enjoys utilizing his technical training to align, calibrate, program, and repair communications systems for the State Police, Homeland Security, INDOT, and several other state, county, and city agencies.

Matt has been blessed and privileged to serve Faith United Methodist Church in several different ways since 1998.

Everyone has God-Given Gifts, and every single gift can be shared and made use of in serving God, His church, and His children.